If you still have questions or prefer to get help directly from an agent, please submit a request. We’ll get back to you as soon as possible.

The following Quickstart guide allows you to jump in and explore the Lob Print & Mail API in your preferred programming language. (If you are a Typescript user, you can jump right in with a video tutorial: Sending a postcard with Typescript.)

You can also learn about our APIs via Postman, here is a video walk-through of Lob's Public Workspace.

In order to follow this Quickstart guide, you will need:

These brief sections are aimed at developers who are less familiar with the languages with which they will be working with Lob API. Currently, Lob provides client libraries in these languages:

Follow the instructions on the TypeScript download page. For Windows, installing through the Visual Studio text editor is the best option.

To make switching between Node versions easy, install nvm on your local machine, following the instructions in the official Node Version Manager GitHub repository. To get the latest LTS release, run:

Alternately, Windows users should install the latest release of nvm-windows by following the instructions in its home repository.

Run ruby -v to check whether it’s pre-installed. If not, run brew install ruby (make sure to install Homebrew first if you haven’t already). Add the path for your version of Ruby to your environment’s PATH variable.

Run php -v to check whether it’s pre-installed. If not, run brew install php (make sure to install Homebrew first if you haven’t already). Add the path for your version of PHP to your environment’s PATH variable.

Download either the Arm 64 or x64 DMG Installer from Java’s official downloads page.

This QuickStart guide provides a code example of Lob’s services: creating a postcard through Lob’s Print & Mail API. Make sure you are in the correct directory before running the code samples (creating one for the purpose of running these is advised, but not required).

Create a new directory and switch to it from your terminal app with these commands.

The next step is to install the version of Lob API which matches the language you are working in:

In this guide, we will be using Maven.

From the command line, create a new maven project

Edit the pom.xml file in the my-app folder to include this bit of code:

In the pom.xml file update the source and target to 1.8

Now that a Lob API wrapper has been installed on your local machine, we can begin by sending a request to the API with the data necessary for postcard creation.

Open the text editor of your choice (if you need to download one, we recommend Visual Studio Code) and paste the code in the language of your choice: (As a note, if the address in question has a suite or apartment number, you can add in a data point for it as such: -d "to[address_line2]=<OPTIONAL SECONDARY INFORMATION>")

In your typescript project folder:

In your new maven project:

In your maven project folder:

This is a sample of the postcard object you will receive upon sending a creation request. Some information breakdowns:

In order to see the postcards you have created, log into your Lob dashboard account and navigate to the “Postcards” tab on the left-side navigation menu. You can toggle between the ones you have created using either your test or live key: 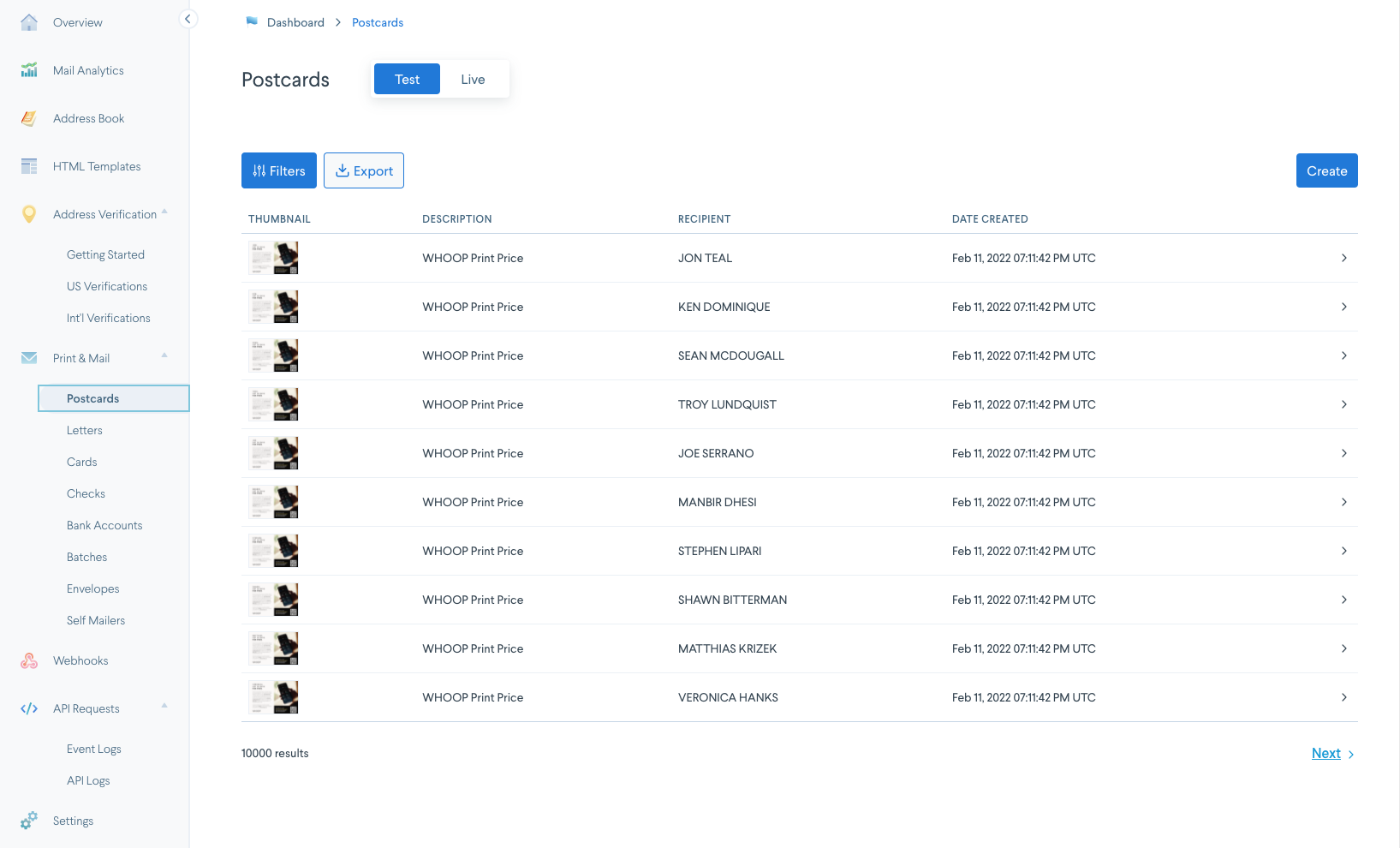 You can find Lob's API documentation here. For more comprehensive code examples for the different languages supported by Lob, see the individual GitHub repositories for each language: